The Liberator... Probably the Greatest Spacecraft Ever!

Way back in the festive season of 1977, the Radio Times proudly announced the arrival of its new sci-fi drama: Blake's 7. As a loyal and devoted 9 year old fan of Dr Who, I viewed this upcoming series as a rival and possible replacement for the show I cherished. However, within seconds of setting eyes on this article, something caught my imagination. It wasn't the incredibly attractive blonde called Jenna, but the image above her.

Spread across two lavishly coloured pages was the breathtaking sight of what still remains today as the most beautiful looking spacecraft ever designed. From that moment onwards, I was a loyal B7 fan before the opening episode had even aired. Like many others, I assumed that the green power source was the ship's cockpit until the spellbinding episode Spacefall revealed the ship in her full glory. It was a directional reversal that added to the Liberator's appeal. No one had simply seen a ship of this design before.

In a break from tradition, producer David Maloney commissioned the BBC's top designer Roger Murray-Leach to design both the Liberator's exterior and interior because Maloney viewed both assignments as one concept. It was a move that infuriated the special effects department who would normally be responsible for designing spacecraft exteriors. Ian Scoones, who supervised all the effects for the 1st season and contributed greatly to some memorable B7 designs, had already designed the Liberator exterior himself only to find that Leach's design had been approved at an earlier stage of pre-production. Scoones' design however was rather functionary (looking uncannily like season 4's Scorpio) and lacked the visual appeal of Leach's blueprint. Scoones made a minor adjustment to Leach's final design, which had an oval power source by replacing it with a more practicable sphere, and he passed on the design to outside contractors Space Models (who built many of the models for UFO & Space 1999) based at Feltham. In a interview for Dreamwatch during the late 80's, Scoones revealed that he regarded the Liberator as "terribly Eastern, architecturally," adding "you can tell a set designer has designed it rather than somebody into spaceships!"

Once Space Models had completed the 3-foot long white model, Scoones then passed the Liberator onto Martin Bower whom had just two days to add intricate detail to the ship's hull and weapon pods. Bower added hundreds of minute pieces of plasticard and panel lines using biro and pencil! He also added four red oxide blocks around the nose and "Letraline" Flex-a-Tape to the "engine ball" which broke up the green area. After having first hand problems in transporting the definitive Liberator model, Bower and Scoones realised that the model was far too heavy to be flown on wires because it contained brass, so Bower constructed a slightly smaller version. Something he later cursed when he realised that he would have to replicate all the fine and intricate detail he had added to the original model. Bower also constructed a 20 inch Liberator for long shots using EMA tubing and Perspex. 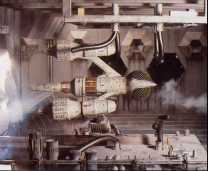 When it came to filming the Liberator, Scoones fears of the "impractical" design were proved to be right. The physical demands of flying the model are almost legendary. Scoones feels that the SFX department would have taken this into account had they designed it. "There are many ways of flying a model so you don't see the wires, and the Liberator was just a damn difficult thing to fly, whether it was on wires, poles or whatever else." Some bloopers involving the definitive Liberator coming of it's pole and crashing to the floor were shown on The Late, Late Breakfast Show in 1982. More problems were encountered when the plastic padding that kept the huge model together would fall off time after time, holding up filming. Bower also found himself having to replace the green power source of the 3-foot Liberator that melted from the heat of the bulb that had accidentally been left on during shooting breaks. Despite problems and reservations about the definitive Liberator model, Ian Scoones went on to produce some of the finest model work for the entire series. Most of season one's budget was spent within the first three episodes at Bray Studios, using talented effects maestro Nick Allder who went on to win an Oscar for his model work on the classic Alien film. Scoones also filmed several "beauty shots" of the Liberator that were used as stock footage including the superb sequence of the ship flying past a amber sun and two planets. Many more sequences were filmed involving the Liberator at Bray studios but amazingly, most were never used! Despite some high quality footage filmed by Scoones, he found that most directors would not accept it. Scoones revealed that directors were in constant competition with each other, and that they would shoot their own footage rather than use the ready filmed stock effects. This led to inferior model sequences that were badly lit and filmed by in-house BBC cameramen who had never worked with minatures. Many of these hastily filmed and under funded sequences also made the mistake of using the smaller Liberator models that were not built for close-up shots.

Despite all the problems encountered by the SFX department. The Liberator soon became a favourite with the show's growing army of fans. The exotic exterior combined with the stylish flight deck could not have been better for a cash starved budget. With the added touch of the ship's almost human computer Zen, many began to regard the Liberator as a character in her own right.

During breaks in filming, the model was actually taken apart like a jigsaw and placed in a box, which meant that a lot of time was spent assembling the model for future shots. In the end, this became too time consuming and the model was sadly neglected later in the show's run in favour of the less detailed minitures.

The definitive Liberator's final appearance was in the episode Ultraworld, where the ship is trapped within an artificial world. It's an impressive effect sequence where you get to appreciate the 3-foot model in her full glory.

A few episodes later, Blake's 7 became the first sci-fi series to treat the destruction of a glorious spacecraft as the death of a beloved character.

The Liberator's demise was emotional viewing when Terminal first aired back in March 1980, and it was a fitting and spectacular end to this unique concept.

To have the "indestructible" Liberator slowly disintegrate from a cancerous and mysterious phenomenon encountered in deep space was inspired writing on the part of the great Terry Nation. It was a fitting end to an incredible idea that was years ahead of its time.

Many will recall with fondness, the wonderful little Corgi minitures that were released in 1979. I wish I still had one! Thanks though to Comet Minatures who released a labour of love in the form of the definitive Liberator model kit in 1989.

In the Aftermath, the Liberator's legacy lives on. Ron Thornton, who built the Scorpio model, later found work pioneering the Emmy award winning CGI effects for Babylon 5. Together with the show's creator (and fellow B7 fan), J. M. Straczynski, they decided to pay homage to the Liberator by basing the Drazi War ship on this much loved DSV that first appeared in the B5 episode Matters of Honor from season 3.

Straczynski's new B5 spin-off Crusade also features a ship called the Excalibur which can almost be described as a DSV 2 and is the closest we may ever get to a CGI Liberator.

Despite being "destroyed" twice during the run of the series, the definitive Liberator still thankfully exists. According to an article dated January 1997 in The Daily Mirror, the three-foot model was auctioned off and sold for £3000. A bargain for a piece of TV history!

Back up to Essay index

Back up to Blakes 7